A Nerf War scenario heavily inspired by the film Commando and the new Nerf Doomlands range written on my train trip to work this morning.

There is 1 player per run: OUR HERO. They are absurdly muscled, ALL-AMERICAN (Though frequently with foreign accents) and carry a vast amount of weapons and ammunition, possibly aided by strategic ammo drops throughout the play area. They are hunting down the BAD GUY, who carries a rifle or shotgun, and possibly a backup pistol if they’re a SNEAKY EVIL FOREIGNER, as they should be. They may also have a mustache to twirl or an outrageously offensive/inappropriate accent. They command a large force of GOONS, who carry 1 main weapon and whose job is to hurl themselves at OUR HERO and die as spectacularly as possible. The BAD GUY may also have a HEAD GOON, who carries a SIGNATURE WEAPON that deals double damage to OUR HERO. 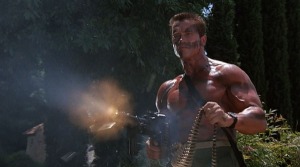 OUR HERO is all but invincible – weapon hits from goons will slow him down (Take a knee for 5 seconds, or be forced to take cover), but only hits from the BAD GUY or the HEAD GOON will actually hurt him. Both OUR HERO and the BAD GUY can take 3 hits, the HEAD GOON can take 2. GOONS can only take one hit, but can return to the battle after going to a re-spawn point.

OUR HERO is out for vengeance against the BAD GUY for an inexplicable reason or to rescue the PLUCKY SIDEKICK. The sidekick starts out in the BAD GUY lair and has just escaped. They may scavenge for weapons and ammo, or carry a single shot weapon with no more than 6 darts.

OUR HERO starts at one end of the play area, the BAD GUY, his HEAD GOON, GOONS and the PLUCKY SIDEKICK the other end of the area. RE-SPAWN POINTS for GOONS are marked on the map, there should be at least 1 on either side of the map. OUR HERO may choose from the range of weapons at the starting point, choosing what approach they are taking to the scenario. They may move through quietly as a PREDATOR or rain down RED HEAT on their foes like some sort of TERMINATOR. Either way, an arming montage is mandatory. 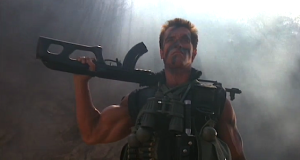 Each run last for 10 minutes, or until OUR HERO either A: kills the BAD GUY or B: rescues the PLUCKY SIDEKICK and escapes back to the starting point, thus preserving the BAD GUY for the inevitable sequel.

OUR HERO is identified by a red headband (RED IS AMERICAN AND NOT AT ALL COMMUNIST) and the PLUCKY SIDEKICK by a white armband. The BAD GUY wears a distinctive item of clothing, the HEAD GOON a black armband, and the GOONS wear green armbands.

So. needs work, but not bad for a train trip. Thoughts?