For those of you patiently awaiting my thoughts on Star Wars: The Force Awakens, you’re in luck. There be spoilers, so you’ve been warned.

Now, numerous other folks will have done long in-depth reviews, having first spent hour’s trawling through rumours and speculation. I don’t have that level of patience and was trying to avoid spoilers beforehand, so I’ve chosen to split this up Sergio Leone style and talk though things by category – The Good, The Bad and The Ugly.

Where do I start? Whoever was responsible for the trailers deserves have their work analyzed for decades to come. A near perfect mix of nostalgia and new, they also told us virtually nothing about the film, a rare feat in this day and age. (See The Phantom Menace trailer which all but told you in GIANT LETTERS Qui-Gon was going to die) I was going to be seeing the film regardless, but trailers of that quality only increased the antici…pation. After all, Revenge of the Sith was over 10 years ago, and while the animated series The Clone Wars and Rebels have helped to wash away the bad taste of the prequels, the film still had it’s work cut out for it to be accepted along the classic trilogy. There’s some issues, but it more than succeeds as far as I’m concerned.

Note to trailer editors: leave this sort of shit out of it please.

The big question to get out of the way is “Is it a good film?” The answer to that is a resounding yes. Sure, it’s not as good as Mad Max Fury Road, but that was ALL SHINY AND CHROME, erm I mean bloody phenomenal. It looks and feels like Star Wars again, with the coldness of the First Order’s military contrasting with the battered and worn feel, of well, almost everything else. See also: the increased amount of practical effects and actual sets instead of a couple of couches and a green screen. 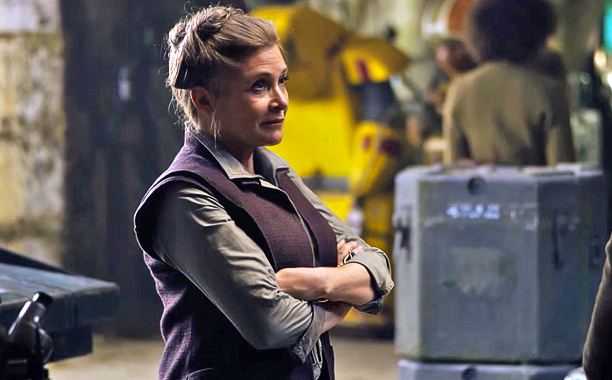 And Carrie Fisher is taking none of your shit. NONE.

BB-8. Everything BB-8 was glorious and I want ALL THE MERCHANDISE EVER. Well, maybe not all of it, but he was definitely the standout. I’m still chuckling over the thumbs up moment.

The Stormtroopers are threatening again. This, this is a big thing, as over the years they’ve become a running joke alongside Red Shirts. I might be happier if the show of force didn’t happen to be massacring innocent villager’s as I’ve always been squeamish about that sort of thing.

The first sight of the Falcon, closely followed by Han and Chewie’s homecoming. Yeah, the mention of a piece of junk should have given things away, but it still made me giddy. I might have also shed a few years of joy DON’T JUDGE ME. 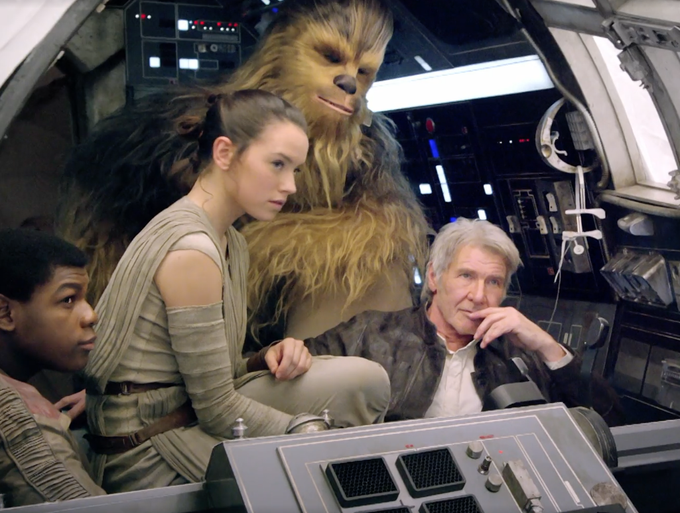 I’m sorry, I can’t hear you over the sound of how awesome I am.

The lightsaber work. Yeah, only 3 people wield one, so it’s not exactly chock full of them. And yes, one of them is half trained (And spends more time smashing up walls rather than duelling) while the other two (one of whom has military training and the other has more experience with staffs) have never held one before, but this has the side effect of cutting out a lot of the spinny flippy stuff from the prequels. It gave way to a more, dare I say it, grounded form of swordplay. And yes, I like the cross guard lightsaber (The long sword was always my preferred weapon). It’s about damn time someone in the that universe does something to protect their hands, even if they do need OHS more. Seriously, a tiny walkway without hand rails over a nigh bottomless pit that’s burning with the power of a sun? I’ve not seen health and safety violations that grievous since Erebor in the Hobbit films.

Hey kiddies, that’s what quillions are for!

The fact that I have (so many) unanswered questions is something else that brings me great joy. Io9 has a long and updated list of them, with my thoughts centred on how did Maz get Luke’s lightsaber (I did love the ‘I’ll explain later’ approach to it) and how did the political situation evolve from the end of Return of the Jedi? Some might say it ruins the happy ending of that film and to an extent you’d be right, but there has to be conflict to help breed drama, otherwise you wind up with S1 of Star Trek: The Next Generation. It’s got me wanting to read the novels again, an achievement after the Yuuzhan Vong saga.

I don’t want to call it bad, but the soundtrack seemed to be lacking something. It’s John Williams, so it’s far from bad, but was lacking that big epic track, like an Imperial March. Even the prequels, for all their flaws gave us Duel of the Fates and Battle of the Heroes, both wonderful pieces. The second time round I was noticing more the re-use of old themes, notably Han and Leia’s and the Force themes. It fits in with the nostalgic feel to the film, but it also means it doesn’t stand on it’s own. Maybe a few more listens will help though.

Some have said that’s overly reliant on plot points from earlier films and to an extent they’re right (What, you say there’s a nigh invincible planet killing super weapon we have to destroy by flying down a small trench? Must be Tuesday.) I can’t fault Abrams and co for doing so though – you need enough familiar elements to bring in the old guard, while hopefully keeping them coming back for the next one. (Based on the box office, they managed that one handily.) Also, the First Order basically worship the Empire and what did they do? Build increasingly impractical super weapons! 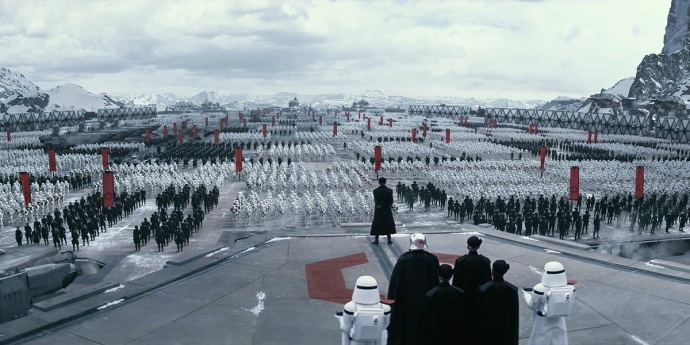 “And now it’s springtime for Hitler, and Palpatine…”

You could also say it’s strung along by nostalgia, with a familiar face popping up every little while to remind you of the movies you loved as a child. That’s not a complaint from me, as it was done well. There was enough nods (Both overt and otherwise) to keep the fans happy, but most importantly if you didn’t know them it didn’t matter one bit. It’s got that in common with the new series of Doctor Who, which has done a wonderful job at nostalgia without tying things up in pointless continuity references (As it did in the 80’s). Also see Attack of the Clones, which put virtually everything you ever wanted in a Star Wars film (Boba Fett! The Clone Wars! Christopher Lee!), but did it really, really badly.

For all the build-up before the film Captain Phasma sure didn’t get to do much. Heck, the speed with which she relented and dropped the shields led to a theory she’s actually working for the Resistance as a double agent. Mind you, being confronted by an angry Wookiee would certainly impact your views. Either way, I believe she’s been confirmed to reappear in Episode 8, so we shall see. Regardless, the armour looked great and I’m sure the 501st are salivating over the costuming opportunities presented. The First Order do continue the long-time trend of bad guys having the snappiest uniforms) 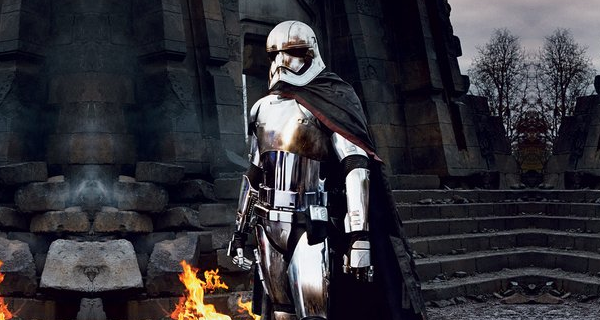 RIDE TO VALHALLA ALL SHINY AND CHROME!

Most of my other complaints, as they are, centre around the series of increasingly useful coincidences. Such as, R2D2 has spent how many years on low power while people try to avoid tripping into him or using him as a doorstop? How exactly does Poe manage to get off Jakku after earlier ejecting from the TIE Fighter? It’s not that they detract from the film (Like counting ammunition in a Schwarzenegger film), but looking back on it they could have been explained better. Oh well, that’s probably more fodder for the deleted scenes on the Blu-Ray.

Well, we had to mention it sooner or later. I’m fairly certain you know the moment I’m talking about. Damn. I should have known the moment was coming (It certainly explains how cheerful Harrison Ford has been on the promotional trail), but that still hurt, hard. And to top it all off, his last waking action is to caress the face of his son. Excuse me a second. WHO’S CUTTING ALL THOSE FUCKING ONIONS HERE? Right, back now, It worked for the story, and it was wonderfully executed. There’s that brief moment when you think it’s all going to work out and have a tiny bit of optimism, and then BOOM. And that’s another icon of my childhood gone. Coming in the same year in which we lost Leonard Nimoy, Terry Pratchett, Phil ‘Philthy Animal’ Taylor and Lemmy Kilmister, it’s been a shit year. Yes, Han’s a fictional character, but I’ve known him for longer (So to speak) than many of my relatives. I realize that’s an incredibly harsh thing to say, but these are relatives I’ve seen once or twice since I was 6 so, all things considered… Look, it still hurts, I’m allowed to be irrational.

Also, I really want that jacket. Preferably in black, but I’ll take brown.

So, to end things. Is it perfect? No. But let’s face it, it was never going to be. But it’s still a damn good film worthy of your time and money. I give it 4 planet destroying super weapons out of 5.