Alestorm / Rumahoy / Christopher Bowes and his Plate of Beans
The Metro, Sydney – 08/02/19

Heavy metal is at it’s best when is embraces the ridiculous. From the theatrics of Kiss and Alice Cooper, Sabaton using a tank as a drum riser and Iron Maiden’s Eddie, metal attracts what would in other circumstances be considered utterly absurd. And Alestorm fit that bill perfectly – songs about drinking, pirates, wenches and more drinking, who can resist that? Yes, I’m aware that being teetotal myself and delighting in tales of alcoholic and chemical excess means I have issues, but I figure by this time I have subscriptions.

It’s been a long time since I’ve been to the Metro, but the smell of spilt beer and sticky carpet bring back memories. Seeing the Datsuns turn the 6 minute Freeze Sucker into a 15 minute epic was one of the greatest nights of my life, and possibly the closest I’ve come to death from sheer exhaustion. Also, seeing the Town Hall McDonalds on a Friday night filled with a mix of very pretty early 20’s people pre clubbing, and a motley hoard of people dressed as pirates was, quite frankly, fucking hilarious and should happen more often.

Thanks to the rain delaying my train and a need for food I miss most of CHRISTOPHER BOWES AND HIS PLATE OF BEANS (AKA Alestorm singer Bowes new side project), arriving for the final two songs, which, well, weren’t quite to my taste. In all fairness, it was their first show, but songs about beans just don’t seem to be my thing. The length of the merch queue puts me off, and I choose to wait for RUMAHOY, who continue tonights pirate themed shenanigans, though oddly they choose to hit stage all wearing balaclavas, which means many a mid song adjustment. It’s not bad, and I’ll give them another shot, but a few songs in I decide to brave the merch line, and come away with a snazzy t-shirt. 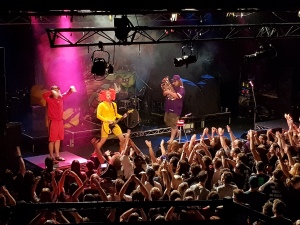 The between set Queen mix-tape prompts a surprise singalong, and it’s the first show I’ve been to where I’ve heard the theme to Blazing Saddles. Finally, ALESTORM hit stage*, and things really start jumping. Ripping into Keelhauled, they waste zero time in getting things going, and put on a set so fun I’m shocked the NSW government didn’t shut it down half way through. The packed out crowd need no signal to start singing along, and a section of the pit even commences rowing during Nancy the Tavern Wench. Choruses are lustily bellowed along to, and Bowes comments that this is the biggest crowd they’ve played to in Australia, which brings cheers from the crowd, matched only by the boo’s when one of the support is introduced as being from Brisbane. The Queenslander in question then proceeds to down a bottle of Jagermeister at speed, and seemed little worse for wear. I’m not quite sure what the giant inflatable duck was doing on stage (I know not to pick them up in dungeons, but what about at concerts?), but a slightly smaller version was hurled into the crowd, and swiftly destroyed upon command. 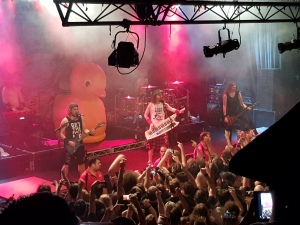 Things come to an end far too soon, with a riotous run through Shipwrecked, followed by the encore, that ending as Bowes introduced the song that would tell us how he felt about us, which meant the crowd roaring the gleefully offensive Fucked by an Anchor back at him.

It was thoroughly stupid, and equal amounts of fun. I can’t wait till they return.

* Side note: Bowes was kilted, which meant I was no longer the only kilted person in the place.