Yes, we’re late again. We’ve been working on a Deadlands freeform, played our first game of Nuclear War (Which was, if you’ll pardon the pun, a blast) and doing the gardening. Yep, it’s been another action packed week in my life…

It’s been a week filled with sequels and reboots, which we shall now take you through. MGM is continuing in it’s impossible quest to remake War Games, there’s the first pictures from the updated series Danger Mouse and  Thunderbirds are Go along with a teaser poster for GI Joe 3, a film that’s nowhere near production. (If you ask me they should just call it GI JOE: NINJAS NINJAS NINJAS and be done with it) Dean Devlin has confirmed the new Stargate film will be a reboot,  Shane Black is writing the new Predator film, though he’s busily insisting it’s a sequel not remake and according to sources the next Terminator film will be called just that. Meanwhile, in a piece of very unexpected but very, very good news, Guillermo Del Toro has announced that Pacific Rim 2 is coming! If you aren’t excited by the prospect of more kaiju vs mecha action, then you might not have a soul.  (I’m still holding out for Hellboy 3 though) 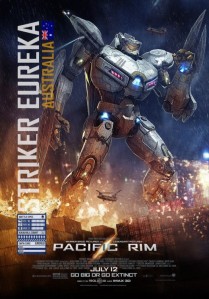 At least it wasn’t called ‘Strewth’ or ‘Crikey!’

The first teaser for the new series of Doctor Who is out and I’m kind of surprised – it’s about 2 months till the show airs and we’ve gotten a 16 second teaser and a few leaked photos. Shouldn’t the publicity machine have kicked off by now? Rumour has it the first episode will be feature length, whatever that means, which is something to look forward to, but as to what’s happening we have no clue. This is good, because it means I’m not spoilt about what monsters are showing up, but it’s bad, because I’m not spoilt about what monsters are showing up and thus aren’t squealing with joy about seeing [INSERT CLASSIC MONSTER] for the first time in many years. In other Who news, actress Siobhan Redmond will be playing The Rani in an upcoming Big Finish story, taking over the role from the late Kate O’Mara.

It’s been confirmed that Hulu won’t be bringing Community back, there’s some casting news for the Wachowski’s new series sense8 and Elden Henson will be playing Foggy Nelson in Daredevil. Rosario Dawson has also been cast, though we’ve no idea who she’s playing. The first look at SyFy’s new series 12 Monkeys has escaped, as has a look at the new series of Danger 5, the utterly and gloriously bonkers series that takes World War 2, filters it through badly dubbed 60’s action movies, adds giant robots, mind controlled dinosaurs and all manner of craziness and then turns it up to 11.THOUSAND. 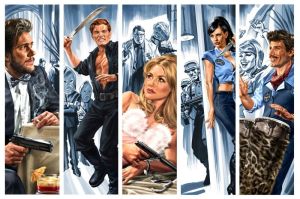 “And for the love of God, DAMN WELL KILL HITLER!”

We’ve a Japanese language version of the trailer for Lupin III, a live action version of the popular manga series that’s had several animated films based on it. If you don’t know who I’m talking about, then go rent/buy/borrow a film called The Castle of Cagliostro NOW. What do you mean the shops aren’t open? GET GOING. I’ll wait. *taps foot* Back now? See, glorious isn’t it? I haven’t seen anything about an English language release, but hopefully there’ll be one at some point. Because I am NOT learning Japanese.

The promo for the BBC America series Intruders (Starring John ‘Life on Mars’ Simm) is mighty creepy, the teenage girl becomes a zombie film Life after Beth looks promising, as does the teaser for The Hunger Games: Mockingjay. The new trailer for Teenage Mutant Ninja Turtles on the other hand… Ninjitsu is based on stealth, blending into the environment and not letting people know you’re there. So, how the hell are you supposed to do that when you’re 7 feet tall and built like a brick shithouse? Mind you, I did like the Batman voice joke, so it’s not Revenge of the Fallen bad, but I’m still keeping my expectations low.

Ben Kingsley will voice Bagheera in the live action version of The Jungle Book, Ridley Scott’s next film will be The Martian and is set to star Matt Damon, while the cutest thing we’ve seen this week is the picture of the Episode 7 table read done in Lego. Seriously, there’s not much Lego can’t make better.  There’s some things it doesn’t need to make better (Like Big Trouble in Little China or Flash Gordon for example), but I’m sure it could still improve them. 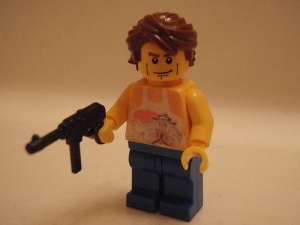 See – told you it was awesome!

Bob Orci has said that Star Trek 3 will return to deep space (Hoo-freakin-ray!), actor Scott McNairy has been cast in an unspecified role in Batman vs Superman: Dawn of Thingamajig and the fifth Pirates film is set to film next year. (Presumably it’ll take that long to transport all the dump trucks filled with money to unload on the front lawn of Johnny Depp’s private island) A movie based on the Monstrumologist book series is on the way and a Blu-Ray set of Star Trek Into Darkness with all the extras collected together (Rather than being spread over multiple store exclusive releases) is finally coming. The only catch is you’ll have to buy the first film again as part of the set, though there’s talk of a refund program being set up. I swear, there’s a special hell waiting for people who release sets like that. A special hell…

Daniel Radcliffe has said he wants to play Robin to Ben Affleck’s Batman, the first pictures from Mad Max: Fury Road are out, as are the first pictures from Suburban Gothic, which has been described as a ‘suburban Scooby Doo.’ It’s a terrible description, but the film does have Kat Dennings and Jeffery Combs, so it (hopefully) will be better than that. The new Fantastic Four movie will apparently have a ‘found footage’ feel to it, Marvel head honcho Kevin Feige has given an update on Ant-Man and Doctor Strange and it’s been confirmed that Nathan Fillion has a tiny cameo in Guardians of the Galaxy.  Shiny! 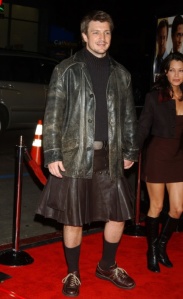 We leave this week with a look at the 60’s Fantastic Four series that never existed (Burgess Meredith as the Mole Man – who do I have to kill the visit the alternate universe where that exists?) and the news that a scientist was ejected from a recent concert of classical music for trying to crowd surf to Handel’s Messiah.

Gottlieb: This is all wrong! There should be three Kaijus coming through, not two!

Dr. Newton Geiszler: There should be three and there’s two? I’m sorry, it hurts to be wrong, don’t it, Hermann?

Gottlieb: I am not wrong, but there is something here we don’t understand.

Dr. Newton Geiszler: Okay. Hermann, we can hopefully argue about any mistakes you made in your your predictive model in the future. But in the meantime, the neural interfaces are way off the charts! If you want to help, help with that.

Gottlieb: Newton, I am not wrong. There is only one way to make sure… and that is to do this… together. I’ll go with you. That’s what the Jaeger pilots do, share the neural load.

Gottlieb: Well, with worldwide destruction a certain alternative… Do I really have a choice?

Dr. Newton Geiszler: Then say it with me, my man: “We’re gonna own this bad boy!”

Gottlieb: By Jove, we are going to own this thing for sure!

One thought on “Sequel? A sequel you say?”