It’s a cold and breezy night in Sydney, not a night to be kilted, as I am. *ahem* After an interesting amount of bus and foot travel, I arrive as Gypsy are ripping through Kiss’s I Stole Your Love, and continue in that vein, playing a set chock full of NWOBHM inspired rock, culminating in a blast through Judas Priest’s Steeler to close. They certainly put their all into things, and while the mid set bubble gun and balloons don’t set the audience alight as perhaps hoped, they deserve an audience that’s keen to see them, and not just the headliners. With a loud cry of “We’re Gypsy and we’ll see you at the merch desk!” they depart, and the wait for the headliners begins. 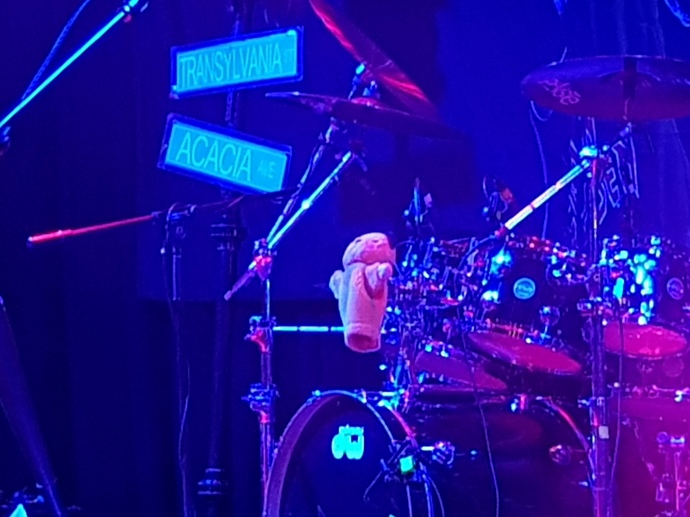 Sooty and Maiden go way back.

Thus begins the change over, during which I notice the Maiden’s drum kit features Sooty (As is customary) and an already rather inebriated man next to me tries to claim that since it’s his birthday I should buy him a drink. No mate, not happening. Nor do I care for the busty lady in photoshopped ‘I love thrash metal’ shirt wallpaper on your phone you keep trying to show me, nor indeed the large amount of wolf whistling from the crowd during the Maiden’s set. Really people? Moving on… 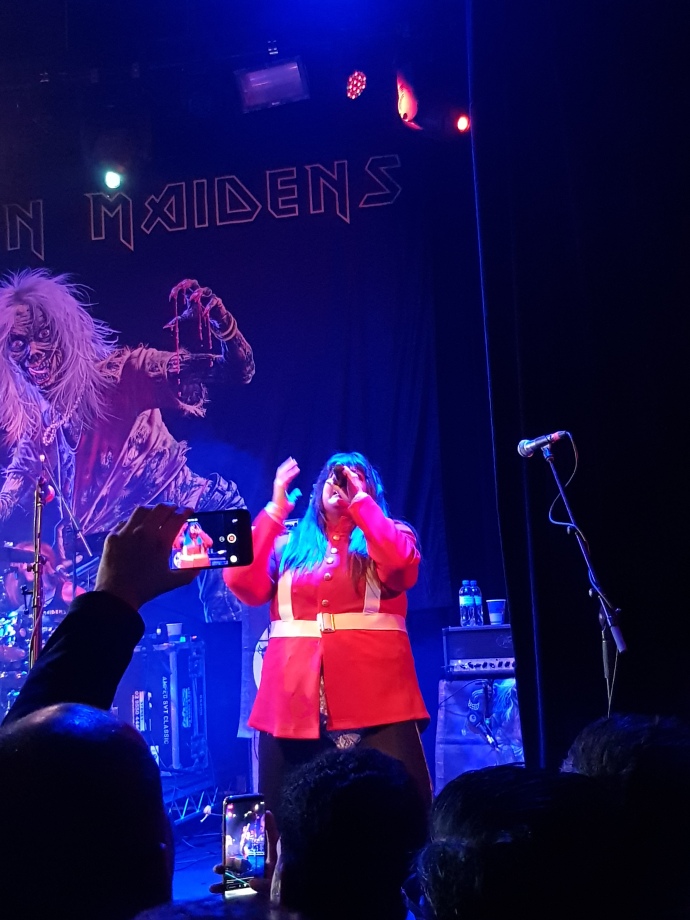 SCREAM FOR HER SYDNEY!

After what seems like an eternity (Actually about 40 mins), the strains of UFO’s Doctor Doctor (As covered by Blaze Bayley era Maiden) rings out and the Maidens take the stage. Churchill’s speech begins, and we’re off with a bang as Aces High takes off! Yeah, I went there. We get a set chock full of classic era (The youngest song is from 1992) hits with a couple more obscure numbers thrown in (I don’t think anyone expected The Duelists) and whilst I was hoping for Wrathchild, seeing Alexander the Great done live was quite the treat – Steve Harris rhyming ‘334BC’ with ‘Aegean Sea’ still makes me smile. I almost turned in my fan card at discovering what I’d thought was Children of the Damned turned out to be Murders in the Rue Morgue, but in my defense both songs intros do sound a little bit alike. A giant cyborg Eddie takes the stage during Wasted Years and we end with a huge sing-along to Fear of the Dark, with, what else but Iron Maiden as the encore.

Do you call them a covers band? Well, yeah, they aren’t playing original material. But what shines through is their genuine love for the music and an incredible amount of skill at it – Maiden themselves haven’t played Alexander live. It was a hell of a night, and I hope they return soon.

Photo from the Iron Maidens Twitter. I’m somewhere down the bottom left.

SET LIST:
Churchill’s Speech / Aces High
2 Minutes to Midnight
22 Acacia Avenue
The Trooper
The Duelists
Number of the Beast
Alexander the Great
Murders in the Rue Morgue
Wasted Years
Children of the Damned
Fear of the Dark
ENCORE:
Iron Maiden