A few thoughts before we begin…

Laser Tag is a lot of fun, though that can depend upon your attitude to small children. Organising a Zerg rush of small children is a useful thing, as others I was playing with demonstrated, whereas I tend to have the knack for attracting people who are just below my sightline and while not the most accurate shots, spray enough laser fire around that I’ll get shot just as I’ve seen them. It’s a bizarre mix of scary precision and the Imperial Stormtrooper Marksmanship Academy and it’s my hope it can be harnessed for Good instead of Evil. Anyhow, let’s begin…

Are you one of those people who constantly worry about George RR Martin dying before he finishes A Song of Ice and Fire? Do you feel the need to mention that in the comments of every article you read about the series, or every time people mention it? If you are, then George RR Martin has two words for you, those being simply ‘Fuck You.’ Martin feels justifiably offended by the questioning and really, who can blame him? Wanting more Ice and Fire is fine, but there’s a way to express that without coming across as a jerk. 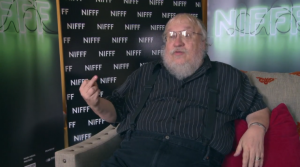 And please remember, George RR Martin is NOT YOUR BITCH.

There’s been big drama at the BBC this week, with the leaking of 5 Doctor Who scripts from the Miami office. We aren’t going to give this any more publicity or give away any details, unlike the (so-called) newspaper The Scottish Sun*cough*scum*cough*. We also have the first image from the premiere episode, which doesn’t give away a lot, mercifully.

SyFy have announced a pilot for The Magicians, based on the novel series by Lev Grossman, Warners schedule for San Diego Comic Con would seem to hint at something related to the Young Justice animated series and Bernard Cornwell’s series The Last Kingdom is getting a television adaption. Frozen has continued is conquest of ALL THE THINGS, with Once Upon a Time casting Queen Elsa while both Firestorm and The Atom will be appearing in Arrow, the third season of which has started shooting. Orphan Black has been renewed for a third season, the Guardians of the Galaxy are set to appear on Ultimate Spider-Man and both a 7th season of Community and a movie are possible. #SevenSeasonsandaMovie doesn’t have quite the same ring to it, but I’ll take what I can get.

Big news about the game Alien: Isolation – 2 DLC missions have been announced where you’ll be able to play as the crew of the Nostromo from the original film. Several of the original cast will also be voicing their characters, including Sigourney Weaver, Tom Skerrit and Yaphet Kotto. The two missions were originally planned to be pre-order only, but will now be released available for all, thanks to the public reaction to the announcement. 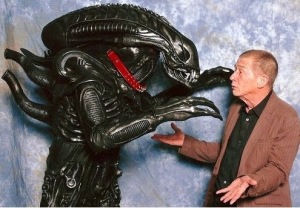 Family reunions can be awkward at the best of times…

Kevin Smith has denied the rumour he wrote a fake Batman vs Superman script and talked about his visit to the set of Episode 7, while his plans to make Clerks 3 have hit a wall, with the Weinstein company not wanting to fund it. In better news, there’s a poster for his next film, Tusk. Speaking of Episode 7, it’s shut down for two weeks, apparently because of Harrison Ford’s recent injury and added two new cast members, while there’s a look at Agent Kallus, the latest Imperial agent in Star Wars Rebels, who if nothing else, has an amazing set of sideburns.

We managed to find a trailer for Sharknado 2: The Second One and it’s either A: the perfect B-movie or B: the sign to drop the bomb and start over. The new trailer for The Zero Theorem is exactly what you’d expect from a Terry Gilliam film, while the first one for Exodus: Gods and Kings all but screams Ridley Scott. (Which is useful, as it’s a Ridley Scott film.) There’s another teaser for The Hunger Games: Mockingjay, an extended trailer for Guardians of the Galaxy, which managed to make me even more excited about it and the first look at season 2 of Sleepy Hollow. A trailer’s been released for the 30th anniversary re-release of Ghostbusters, though we’re only heard of screenings in the US and UK and a trailer has emerged for the straight to DVD film based the PS3 game Heavenly Sword, starring most of the game’s cast (Alfred Molina replaces Andy Serkis).

Mike Mignola is writing the series Hellboy: The Lost Years and JK Rowling has released a new Harry Potter story, starring Harry as an adult. Two more writers have been hired on for Ant-Man, Mark Ruffalo has been promising more ‘science bros scenes’ in Avengers: Age of Ultron while Gal Gadot hasn’t shot any scenes as Wonder Woman for Dawn of Justice yet. 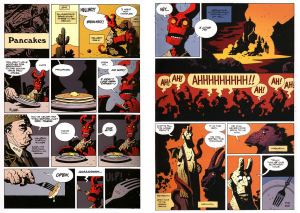 Rumour has it Mark `Wahlberg in in line to play Steve Austin in the Six Million Dollar Man, Guillermo Del Toro reckons he can make At the Mountains of Madness as a PG-13 (The rough equivalent to our M rating) and he’s also mentioned he wants to make a small black and white film before Pacific Rim 2. And that’s without mentioning the animated series he has planned. There is a guy who does not like free time…

Stan Lee put his angry old man pants on the day he was ranting about movie credits being too long (If I know there’s something at the end it means I have more time to run to the toilet and back), The Conjuring is getting a spin off, Chris Columbous has joined the Gremlins reboot and Gus Van Sant could be directing the live action Death Note movie. Bryan Singer’s developing a movie adaption of the book series Age of Heroes, Roberto Orci suddenly isn’t confirmed to be directing Star Trek 3 anymore and we have what would appear to be the first look at the dinosaurs of Jurassic World.

The week’s collection of random stuff includes a Star Wars fan film made by American football players at Georgia University, McFarlane  Toys are making Walking Dead Lego sets  (Well, not quite Lego but close), scientists have created a tractor beam using water and there’s a gallery of artwork from Ralph McQuarrie and Syd Mead for a remake of Forbidden Planet that Irvin Kirshner was trying to get off the ground in the 90’s.

We leave you with the strangest thing I’ve seen this week – what’s said to be a Japanese Doctor Who parody from the 70’s found on an old VHS. (Yes, I know it was actually made by a British film student – CAN’T YOU LEAVE ME WITH MY DELUSIONS?)

(Hellboy has caught Abe listening to a CD of love songs)

Hellboy: You’re in love. Have a beer.

Abe Sapien: No, no, no. The glandular balance of–

Hellboy: Just shut up and drink it, would you?

Hellboy: “Can’t… Smile… Without You.”