“Rock and roll ain’t no riddle man, to me it makes good, good sense”

Truer words have rarely been spoken.

I am, and probably always will be, more than a bit intense about things.

I don’t do casual very well. I was raised in an Anglican household, but left in my early teens. My only memory of church is the look on the face of a clown that was trying to involve me in the day’s games, a look I’d like to say was fear, but was more like “That little prat’s not going to want to do anything.” Religion never did much for me – if more people followed the basic message of ‘Don’t be a dick’ the world would be a much better place, but the higher aspects never interested me. What replaced that in my life was music.

I started slow – I was, and still am to a certain extent, a Dire Straits fan, though I’ve no recollection of how I first heard them. You may laugh (And you’d be entitled to), but I still regard Mark Knopfler’s guitar on Tunnel of Love as a thing of beauty. It was AC/DC that started the path I walk today, when I first heard Who Made Who, then got their Live album as a present later that year, an album that was something of a revelation for me. I stuck with that for a few years before branching out, with detours into Guns and Roses and Nirvana fandom, but there are three bands that stand above all: Iron Maiden (Who I’ve spoke of previously), Radio Birdman and the Ramones. You see, in case you missed the news, Tommy Ramone died recently, which means all 4 of the original line-up are no longer with us. Lymphatic cancer took Joey in 2001, a heroin overdose took Dee Dee, prostate cancer took Johnny in 2004 and now bile duct cancer has taken Tommy. Yes, we still have Marky, CJ and Richie (And Clem, though few talk about him), but all the originals have left us. Numerous end of an era clichés have been banded about, but as much as I hate them, they’re true.

To say the Ramones mean a lot to me is an understatement, like calling invading Russia in a winter a bit of a cockup. I remember an interview with Pete Porker where he said he recalled something from a fanzine, that said “True love is when she means as much to you as the Ramones”, and I’ve basically felt that way since I heard them. From the first seconds of It’s Alive, I knew this was for me. 4 guys, 3 chords, 2 minutes and 1 surname. How can you possibly improve on that?

That band spoke to me in a way that nothing else has – when things were horrible, as they are for all teenagers, the Ramones were there. It was a great purging of emotions, taking all that I felt was shitty in my life and venting that in a blast of audio rage. I can’t claim to have had a shitty childhood (If I could I’d nominate my mother for a well-deserved sainthood), but what teenager doesn’t feel like that at one point or another? You have to have an outlet, and since I wasn’t interested in booze, drugs or God (As almost everyone else I went to high school was), music fitted that quite nicely.

I never got to see them live, the closest I came to that was seeing Marky Ramone in spoken word mode, followed by him drumming with the Spazzys, which was a great show (The story of having to watch Rock and Roll High School to remember making it was a highlight, followed by the random outburst of swearing at a chunk of the audience) It’s not much, but I can say I was in the same room as a Ramone and that’s enough. Hell, during a farewell at my last job I damn near wept when the staff band played Blitzkrieg Bop. Couldn’t help it. Same as when the Dictators played it when they toured in 2003. Couldn’t help it then either.

I’m too wrapped up in them to try and explain the appeal without you listening to them. I could try, but it’ll be a lot easier if you just go out and buy the first four albums (Ramones, Leave Home, Rocket to Russia, Road to Ruin) and It’s Alive and put them on. It won’t cost you much and will take you less than half a day to listen to, but your life will be all the better for it.

I could (and probably will at some point) go on about some of the other artists who’s work I adore: Radio Birdman’s Radios Appear (Which I listened to for a fortnight straight when I first got it) Sonic’s Rendezvous Band’s City Slang, a song as glorious as the lyrics are changeable or Warren Zevon’s tales of addiction, perfectly coiffed werewolves and headless Thompson gunners. There’s Dub War (and later Skindred’s) ability to take almost every musical genre there is, chuck them in a blender and have music emerge, the about to collapse drug fuelled clatter of the New York Dolls, the effortless brilliance of the Sunnyboys (Who’s Alone With You is up there with Alice Cooper’s I’m Eighteen for best teen angst song ever recorded) or everything about Motorhead, but I’ll spare you. This time…

I guess what I struggle to understand the most is how people aren’t as moved by music as I am. Yeah, I accept that everyone has different taste (the fools), but how you can you not be moved by it? Can you listen to Creeping Death and not want to scream DIE MOTHERFUCKER DIE at the top of your lungs? Does Battle Hymn not want to make you act like Conan the Barbarian (or join a gym)? Can you listen to Tony Iommi’s guitar on Heaven and Hell and not want to weep with joy? Cause if music doesn’t affect you like that, well, you have both my everlasting sympathy and pity. That’s what it does for me and I can’t imagine my life without it.

I  suppose I should finish this up, so I’ll leave you with this message: LEMMY IS GOD. 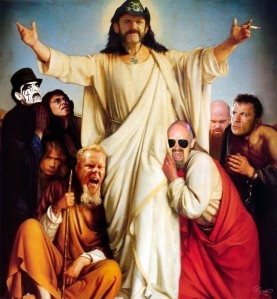