So, there’s not been much blogging of late. I’d like to blame the heat, or any number of other factors, but the truth is I’m rubbish without a deadline. The last few days has mostly been writing for a LARP I’m in and listening to Dio era Black Sabbath. There’s far worse ways to spend the time, but possibly more productive ways. Anyhow, we’re back, so let’s get this going.

We start this week with more than the recommended dose of “You’re joking, right?” I’d love to find a witty way to introduce this, but I can’t, so here goes: Back to the Future: The Musical. Robert Zemeckis is directing, as well as writing the show with Bob Gale (Who co-wrote the film), with composer Alan Silvestri scoring. So, anyone expecting a song about your mother hitting on you?

OK, something less strange. *rummages* Well, the new Doctor’s costume has been unveiled and it’s mighty spiffy. Well, except for the cardigan, but we can’t have everything. As numerous others have pointed out it’s very reminiscent of the Third Doctor Jon Pertwee’s outfit, with Capaldi further adding to that with the post he’s striking. While we’re talking Doctor Who, there’s a fan made Who themed version of Cards Against Humanity called Cards Against Gallifrey and a trailer for the fan made documentary, Who’s Changing? 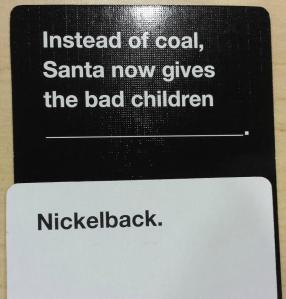 That’s the most work-safe combination I could find.

Fun Fact: Jon Pertwee was one of the back-ups in-case Sean Connery didn’t want to play Henry Jones Snr in Indiana Jones and the Last Crusade. As much as I’d love to say I came up with the line ‘Only the penitent man shall reverse the polarity’, it’s not one of mine.

The rumours around the Agent Carter TV show continue to rumble, with new word that the show has a script and producers. In more welcome news, Lady Sif will be appearing in Agents of SHIELD and Batman vs Superman has been pushed back 10 months, with Ant-Man taking it’s release date. Anna Paquin might be back in X-Men: Days of Future Past, Gal Gadot has signed up for three  Wonder Woman films, but sadly Stan Lee won’t have a cameo in Guardians of the Galaxy.

Thor 3 has been announced, we have a couple of stills from Tom Hiddleston’s audition for Thor (It’s on the Blu-Ray for the second movie) and has appeared, along with Mark Strong and Ben Kingsley, in a Jaguar car ad that asks Why are all Bad Guys British? Thanks to merchandise we’ve gotten a look at the Guardians of the Galaxy and the new Teenage Mutant Ninja Turtles, as well as a closer look at the Falcon from Captain America: The Winter Soldier.

Yes, it’s kinda creepy, but not as bad as the underwear…

There’s trailers for the straight to DVD movies Justice League Adventures: Trapped in Time and Son of Batman and a look at Necessary Evil, a documentary on the villains of DC Comics and which I’m slightly ashamed to admit I only just found out about. We also have a teaser for the anime styled Avengers Confidential: Black Widow and Punisher (Gee, I wonder who’s in that one…),  a TV spot for Amazing Spider-Man 2 and a deleted scene from Thor: The Dark World.

X-Men producer Lauren Shuler Donner wants to make a Gambit movie starring, you’ll want to be sitting down for this part, Channing Tatum. Yeah… I’m not sure where to place that on the scale of bad ideas – it’s somewhere between ‘getting hit in the crotch with a brick’ and ‘invading Russia in winter’, but below ‘Batman and Robin.’

There’s new trailers for Malificent and 300: Rise of an Empire, which might not be a very good film, but they’ve sampled Black Sabbath’s War Pigs, so they’ve done something right. We have another teaser for the TV adaption of From Dusk Till Dawn and new spots for Scarlet Johansson’s Under the Skin and Terry Gilliam’s latest, The Zero Theorem.  There’s also trailers for Sinbad: The Fifth Voyage, which boats stop motion animation and a voiceover from Patrick Stewart,  and the movie Occulus, which stars  Amy Pond and Kara Thrace. (Or Karen Gillan and Katee Sackhoff for the pedantic)

The rumours about Pixar making a Star Wars movie are most likely false, Billy Dee Williams would love to return for Episode 7 and we also have details on a new character from the upcoming Star Wars: Rebels, a cranky astromech droid known as Chopper. *waves $10 note* This goes to the first person to overdub the droid noise with dialogue from Chopper. C’mon, you know you want to do it…

In the ‘Too Good to be True’ category comes word of a rumour that Dame Judi Dench is to play Mon Mothma in the next Star Wars movie. (For what it’s worth, Caroline Blakiston, who played her in Return of the Jedi, is still active.) 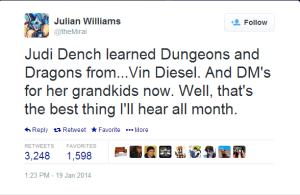 You can’t tell me that’s not true – I REFUSE TO DISBELIEVE.

The TV remake of Barbarella is still on the way and some casting news for the Rosemary’s Baby adaption. We’ve a collection of new pictures from season 4 of Game of Thrones and if you were spooked by the announcement of a John Constantine TV show, there’s some god news – the mighty Neil Marshall (Who you may remember from directing such films as Dog Soldiers and Centurion) will be directing the pilot. No, that doesn’t guarantee it’ll be good, but there’s a slightly better chance of it!

The week’s most important news is that Lego are releasing a Ghostbusters set this year and in the week’s least important news, it’s been confirmed that Ian Ziering and Tara Reid will return for Sharknado 2. The movie adaption of Stephen King’s Dark Tower series might be back on and the producer of Transformers: Age of Extinction is insisted the film isn’t a reboot. How about you just make a good movie, can you do that?

We end this week with a gloriously nerdy internet flame war between the Star Wars and Marvel Twitter accounts. People are getting paid to do that, with actual money. Alec Hardison was right – it truly is the age of the geek.

Doc: The way I see it, if you’re going to build a time machine into a car, why not do it with some style?

Back to the Future