So, I haven’t exactly updated things in a while, or at all. We’d like to say we’ve been off on glamorous adventures, but it’s more a combination of camping with the in laws, Motorhead’s latest album and the new Tomb Raider game that have kept me away. I also picked up the board game Lords of Waterdeep, but haven’t had the chance to play it yet. Soon…

Anyhow, given that this is the first proper post and all, I guess I should outline any plans I have for this humble thing. Basically, I want to continue the weekly news blog I was doing for the late, lamented and much missed SF channel, interspersed with freeform ramblings on whatever comes to mind.

The week’s top stories are!

Moving to the rest of the news, there’s plans to open a  HR Giger themed bar in the US (Based on the Giger Room in Switzerland) and a fascinating interview with Ron Friedman, writer of Transformers: The Movie and who tore the hearts of out the best part of my generation, THE UNFEELING BASTARD. (To be honest, the smelting pools inside Unicron scarred me more, though nothing has matched Judge Doom from Who Framed Roger Rabbit? for childhood trauma) 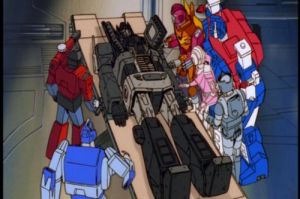 He wasn’t dead, but came back later as a zombie. No, I’m not kidding.

Trailer wise, we have ones for the live action version of the anime Kite, starring Samuel L Jackson, yet another trailer for Snowpiercer (Just release the original cut Weinstein!) and Donnie Yen’s new film Monkey King, an adaption of Journey to the West, or as I know it Monkey! There’s a new viral ad for the remake of Robocop, another trailer and some posters for The Lego Movie and the opening credits for Black Sails, the Starz network’s new pirate show. The fact that Bear McCreary is doing the soundtrack almost justifies the shows existence as far as I’m concerned.

You can watch the first 15 minutes of Helix, the new Ron Moore show, a clip from indie horror film Blood Glacier, Stan Lee introduces a short promo clip for Amazing Spider-Man 2 and the first part of an Argentinian Robotech fan film, Valkyrie Project, has been released. The first poster for the web series Street Fighter: Assassin’s Fist has surfaced, as has a clip from the new Powerpuff Girls special and a short piece from Justice League War.

In comics news, the big recent announcement was that Disney have given the license for Star Wars comics to Marvel, replacing Dark Horse Comics, who’ve had the license for the past 22 years. They’ll be getting one last hurrah though, with the four part finale for The Clone Wars being adapted to comics, titled Darth Maul: Son of Dathomir. Disney are also attempting to refine Star Wars canon, which in recent years has become dangerously overstuffed. Isn’t there one day when nothing happens in that galaxy? 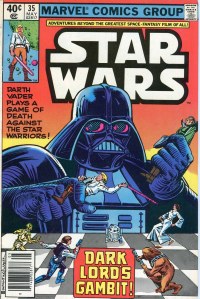 No sir, I didn’t see you playing with your dolls again sir!

Word is that Lawrence Kasdan will be writing the Boba Fett spin off movie, the Marvel animated film Big Hero 6 has a new director and Kevin Smith has given an update on his next projects, saying Clerks 3 will be shooting in May. Gareth Roberts will be writing for the next season of Doctor Who, which began filming this week. Some on set pictures have leaked, showing the return of several old friends.

Anna Paquin has been cut from X-Men: Days of Future Past (Bryan Singer said it was one scene and should make the DVD) while Evan Jonigkeit (Who is, I believe, in the TV show Girls) will be playing a younger version of Toad, played by Ray Park in the first movie. The first official image from Guardians of the Galaxy has been released and it was finally confirmed that Vin Diesel is the voice of Groot. There’s some concept art of the Valkyrie that could have featured in Thor: The Dark World and Edgar Wright tweeted a curious image titled ’Homework.’ . Stan Lee is said to have a big role on the upcoming episode of Agents of SHIELD and while there’s been rumblings about Haley Atwell moving to the US for 6 months to start work on the Agent Carter series, it is just a rumour at this stage.

The next Marvel short film, to appear on the Blu-Ray of Thor: The Dark World, is called ‘All Hail the King.’ Now, we know that Ben Kingsley has shot something, possibly in his Iron Man 3 role or it could be related to [THOR THE DARK WORLD SPOILERS]. The film will be released in the US late February, so the wait won’t be too long. The rumours about an X-Men/Fantastic Four crossover movie have come up again and word is Robert Downey Jr wants to bring Mel Gibson and Jodie Foster into the Marvel universe. In all fairness, Gibson spent a long time championing Downey Jr when no-one would hire him, so I can’t blame Downey Jr for wanting to return the favour, but I’ve no idea who Gibson could play. (There’s an easy joke about him playing Hate-Monger, but I’m not going to make it) 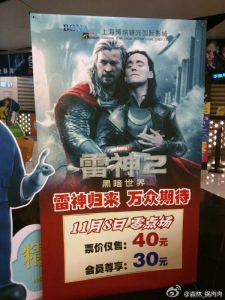 Over on the DC front, Dwayne ‘The Rock’ Johnson tweeted about a big meeting with Warner Brothers about a DC Comics project and the rumours about Wonder Woman’s origin in Batman vs Superman are ludicrous enough to be believable. They also make me want to BURN ALL THE THINGS ALL OF THE TIME, but I’m normally that way. Oh, and if you need another example of just how much DC is failing, there’s a letter they wrote in response to a young reader, which is a mighty fine example of corporate double speak in claiming their movies are outselling Marvels. Maybe if you put Wonder Woman on the screen before Marvel did a talking tree and Raccoon, you might be able to claim that…

We have a few details on the new show Sense8, which is being developed by J Michael Straczynski and the Wachowskis for Netflix, Danny Cannon (Judge Dredd)  will direct the pilot of Gotham and the first couple of pictures from Guilermo Del Toro’s new series The Strain. Matt Reeves has been hired to direct the third Planet of the Apes movie and some leaked toy pictures have given us a look at the Dinobots of Transformers: Age of Extinction. Michael Bay, if you screw them up…

We end this week with video of what happens when you fire a super soaker of boiling water in sub-zero temperatures. Let’s just say don’t try that at home and I have an idea for an improvised weapon in the next zombie apocalypse game I play in.