Right, so from the reaction the game idea got in the pub last night, it looks like post apocalyptic is the way to go. Whether that’s due to there being demand for that sort of event, or dropbears I’m not sure, but I’m not going to dispute it.Don’t have a name yet, with the most prominent ideas being FALLOUT:STRAYA and RECOVERY.

The ideas started flowing, some better than others. Cults based around TV shows (Or casinos, with the prayer sign mining pulling the handle), people who wear wearing bluetooth being mutated and now are able to communicate via hive mind or the Holy Wars between the followers of Farnesy and Barnesy. An underground mutant fighting ring (“The drop bear we captured last week against the platypus in the local river”). The perk to resist fear effects called Brown Underpants. A beer based economy or task resolution method, simulated by playing Beer Pong or catch with larger and more unweildy gloves. Mind you, I’m still cackling about the idea of sending a group into the wilds, playing the sounds of angry koalas through hidden speakers, and then –  A HORDE OF CREW IN BLOODSTAINED KOALA COSTUMES, CLAWS BARED FOR BATTLE charging from the woods. Yep, I like the sound of that. And we haven’t gotten to the spiders or platypus yet…

First thought: what time is it, AKA, how long has it been since the world fell? I’m torn between it was 3 days ago and now the containment facilities (Built in secret at Macquarie Uni in the 70’s by ASIO and the CIA) have been opened. There was discussion of tribalism between students and faculties, what with everyone blaming the science students (“What, it was only a little Gamma radiation, what could go wrong?”)

or things went to hell a few years ago. Say, it started to crack in the mid 90’s. Enough time to local wildlife to have mutated, but the survivors still have some functioning tech (Possibly even WiFi in the really advanced areas) but enough time that history has fragmented. I’m more inclined to the second (As it’s a little more Mad Max, but am open to running the odd ‘just as the bombs fell’ one-shot in future), but I’m a little fixated upon having crude cyber tech – think the tech level of Warhammer 40,000 Orks. 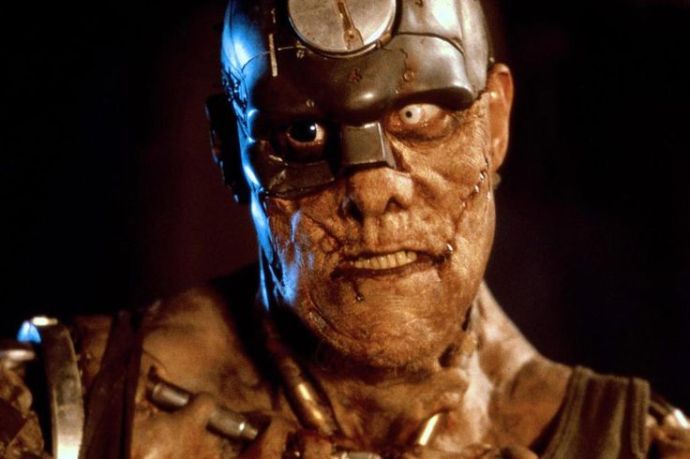 WEAPONS: Gun are rare, and ammo is rarer. People who can repair them or manufacture new ones are hoarded. You get shot, you’re in serious trouble. Bows have made a comeback, with people realizing you can reuse ammo. Melee weapons won’t tickle, but seeing a firearm pulled means things have gone south real quick. I’d like an element of danger, but I also don’t want PC’s dropping like flies. The threat of death is good, but not a TPK every game.

The Mad Max series – do you have to ask?

Tank Girl – a film, despite it’s numerous flaws, that I adore for a piece of it’s soundtrack. Well, and Malcolm McDowell. Plus what’s not to love about a film with Ice-T as a mutant kangaroo?

The Mutants Down Under and Rifts: Australia sourcebooks. FUN FACT: A mate of mine knows/knew the author of Rifts: Australia, who was very firm about stating the giant kangaroos weren’t his fault.