Roughly 600 humans began the latest Zedtown. 1 got evacuated at the end.

Yep. Around 600 started, and 1 made it out. True, there were a number more who survived (I believe around 100, though I could be wrong), but weren’t at the evacuation point at game end.  But still, 600 go in and 1 comes out. That’s one hell of a Thunderdome.

That was my third Zedtown, second as player and it was a joy to participate in. I continued my track record of A:not surviving and B: managing to hide from photographers, both of which I’d like to change in future. If I had to sum up how I felt, it would be with one word: ow. My legs ache, shoulders are sore and the fingers on my left hand were cramped from holding a trigger for several hours. Praise be to Deep Heat, the miracle substance! Mercifully the paranoia is fading, though we had someone run past us at the shops post game and we almost went for our blasters. That might have been awkward.

The Cons:
The cold. Nothing the orgs can do about that, but I was damn glad for the Driza-Bone I had on.

The line. Look, the queue at set up is part of the experience, but having clearer signage as to which line is for what faction would have been useful. We almost made it to the front of one line only to find that we were in the wrong faction’s line…

Really, everything else. The NPC’s were fantastic, the mods helpful and polite and any issues we had were dealt with promptly. Sure, there were technical issues with a couple of things and the game did start late, but those are minor quibbles.

The level of costuming was it’s usual high standard. There was one group clad in bright primary colours and tuts, Mario and Luigi, some nuns, one group in doctor’s scrubs and a seemingly endless variety of tactical gear, slings and combat webbing. My group? We were the squad ‘Those with Guns’, dressing old west style. 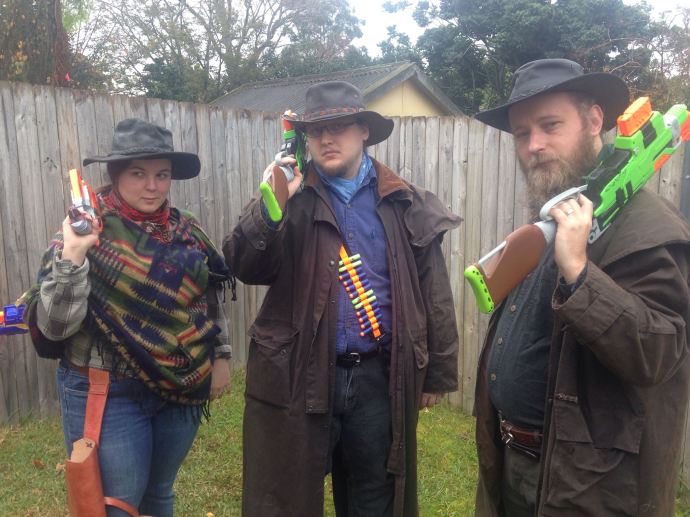 “There’s two kinds of people in the world my friend. Those with loaded guns, and those who dig.”

When the game began paranoia kicked in incredibly quickly. There was talk of a corridor near Gold Base that held a zombie spawn point with an improved zombie said to be guarding it. There wasn’t as much paranoia over hidden zombies as I remember from the previous event, at least that I saw, mostly cause my group hadn’t ticked the OZ box.

We spent some time foraging for fuel coasters and dodging zombies, the numbers of which were still under 100. Early on the survivors far outnumbered the zombies, but that doesn’t help things much. Panic and nerves are high, especially with Original Zombies (Or OZ’s) hidden away in each faction. We ran from Alpha Zombies (We didn’t know they could be killed at the time) and ended up taking ‘sticky eggs’ (Ping Pong balls covered in something I think was lube) over to the shop, which was roughly 2/3rd’s of the map away. It was during that quest that the first of my squad was lost, and I was separated from the second. Much travelling, some running and wracked nerves managed to bring my egg to the shop to claim my reward, that being a disgusted shopkeeper giving me a coin to take the egg away.

The shopkeeper’s ‘assistant.’ Never did find out if they managed to open the safe.

We trekked from one side of the map to the other, escorting an NPC with a flashy whirly device, said to be able to turn the territory into an evac point. The members of Red Faction seemingly let us have it, possibly in the name of human solidarity. They outnumbered us, and we had zombies at our backs, but the flashly whirly device was kept safe through it’s countdown and the point was ours.

We got told to hold that point (While the rest of the group fought their way back to gold base), so we spent the next hour on the edge of the clearing watching lights moving through the trees, dealing quietly with any zombies who were nearby and trying not to freeze. The later it got, the louder the chants of “HORDE!” became and the more we tried to sink into the earth, both so as not to get spotted but also because it might have been warmer there. As the time ticked down, we decided to blast our way into the safe zone and ran for it. I’ll admit, I might have been tagged as I was leaping into the zone – I can only apologise and blame adrenaline.

We’d made it to the safe zone and evac, or so we thought… Given the number of zombies the safe zone was decaying and the clock was ticking. After a countdown, the zombies charged and it was all over. Well, except for 1 lucky sod, who had hidden away under all our corpses. Nicely done sir!

Carry more snacks with me. I was starving and cramping up by the end. It’s not often I say I’d have killed for a Mars Bar, but I was close by the end.

A torch, preferably gaffa taped to the barrel of my main blaster. I hadn’t expected it to get quite so dark as it did, though we were up around the top of the map away from buildings and light sources. This didn’t help much when car headlights from the nearby street kept seeming like torchlight.

A different loadout. The Slingfire’s a fine weapon, but it fires a bit too slow and the reload is cumbersome. We’re torn between twin pistols (Hammershots most likely), or a full auto rifle (Most likely the Rapid Strike). At the very least something pump action, maybe one of the Rebelle Crossbows.

Night Vision Goggles. I kid, mostly. At the very least, a set of binoculars or scope would have come in handy.

Radios. Sure, they don’t fit the old west theme, but they could have been useful when we got seperated.

Costuming: More comfortable shoes for one thing. We’re looking at coming as Templars, from the roleplaying game Deadlands: Hell on Earth for the next event, both to keep the post apocalyptic theme going and to stand out again.