It’s been an amazing week for nostalgia, with the re-release of classic space combat games X-Wing and TIE Fighter. My response to this has ranged from an initial scream of HOLY ZARQUON SINGING FISH to having to restrain myself from squealing with joy (Hey, I was at work) to walking round with a grin on my face so wide that it threatened to snap my face in half. And this is in the same week that Captain Marvel and Black Panther movies got announced, so it’s not like I’m short of geekgasm.

That’s basically how I looked when I first saw the press release.

Those games are a massive part of my adolesence, since it’s not like I was doing things like partying, drinking or spending time with the fairer sex. Ahem… X-Wing let me live out a childhood dream of taking part in the attack of the first Death Star, which I then never managed to complete owing to it being ludicrously difficult. TIE Fighter, on the other hand, was where I took my first steps on the dark path and found that playing the bad guys can be incredibly fun. (See the TV show Leverage for more of that) It also had several features that X-Wing lacked, such as backing up your scores if you got killed, being able to match speed with your target and the TIE Defender, the most broken Starfighter EVER. You also got a second campaign, where if you talked a with a mysterious Cloaked Figure, and completed a bunch of hidden objectives, you got an awesome tattoo slowly branded on your arm by FORCE LIGHTNING, a tattoo that I’m unashamed to admit I wanted badly when I was 14, and still do a little at 34. 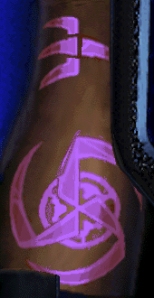 See – told you it was awesome.

Just flying a TIE Fighter itself was amazing – the sound of the things is practically engraved on my eardrums. Hell, the only reason I’m writing this and not playing the games is my lack of a joystick, something I intend to rectify over the weekend. Then I’ll be 14 again, it’ll be back to my youth, or at least the bits of it I actually like remembering. Now, if they can also re-release X-Wing vs TIE Fighter and X-Wing Alliance, then I may be so happy the universe will shatter.

PS: I still want one of the Imperial Officer uniform caps, despite the fact I’m sure I’d look ludicrous in it. But I did once buy a pair of WW2 flying goggles solely to wear to a Crimson Skies Clix tourney, so I have some history in that department.