Some have asked after reading my recent piece on the Ramones for more on just why this band means so much to me. Well, be careful what you wish for.

Firstly, I stand by my original recommendation, which is go out, buy the first 4 albums (Ramones, Leave Home, Rocket to Russia, Road to Ruin) and It’s Alive, then take them home and listen to them, preferably at a police attracting volume. But, since you require more than that before committing your hard earned monies (Sensible in this day and age), then HEY! HO! LET’S GO!

To begin, consider the opening lyrics to Rockaway Beach, from the album Rocket to Russia:

Chewing out a rhythm on my bubblegum.

The sun is out and I want some.

It’s not hard, not far to reach,

We can hitch a ride to Rockaway Beach.

What, you mean you aren’t already sold? Tough crowd you are… 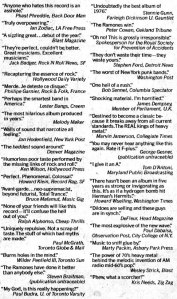 Let’s look at the music then. It’s simple 3 chord rock, with little more than guitars, bass, drums and vocals, played at a speed that may sound tame today, in an era that contains Slayer, but in the mid 70’s was faster than light. Why is this so special? Consider the state of ‘popular’ music. Pro Tools, Auto Tune, an ocean of manufactured pop acts and bands that only exist in the studio (You want to call yourself a musician, you play live) and all those goddamned TV talent shows, stuffed full of people singing the same shitty pop songs and deluded into the belief that they’ll be ‘stars’ for longer than 5 seconds. Yeah, I’m sure they’re lovely people, but I don’t care. It’s that instant stardom mentality that’s destroying music as far as I’m concerned. Anyhow, back to my point. There’s something refreshing about a song that’s nothing more than 3 chords and verse, chorus, verse. Solo’s? Fuck that. Extended instrumental passages? Go away. Virtuosic playing? You must be joking. It’s liberating, inspiring and all those other bullshit motivational words. You didn’t have to sit in your bedroom for fifteen years practising, all you needed was 3 chords and the guts to get onstage and that’s something that’s needed, badly. 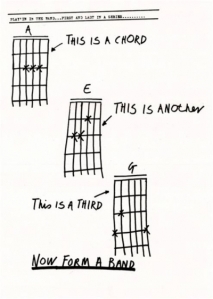 It’s no bullshit music, all killer, no filler and even if there’s a song you don’t like, at the speed they play it’s over before you know it. It’s wasn’t any one person, but a mix of all four of them that made the band what it was. Combine Johnny’s ferocious down strumming (Which was basically all he knew how to do on the guitar), Tommy’s rudimentary drumming (He was set to manage the band, until their lack of suitable drummers put him behind the kit), Dee Dee’s autobiographical song writing (53rd and 3rd wasn’t just a song…) and Joey’s amazing voice (It should be the dictionary definition of teen angst) and everything just worked, like a musical Frankenstein’s monster, or Voltron. 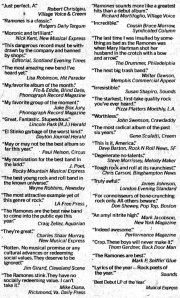 And they wrote about everything. There were songs about teenage boredom, cretins, loneliness, axe murderers, bizarre family, shock treatment, drugs, violence and other subjects that make for great pop songs. And love. Oh, were there ever love songs… From ‘I Wanna Be Your Boyfriend’ (Fun Fact: that played at my wedding) to ‘She’s a Sensation’, ‘She’s the One’, ‘Oh Oh, I Love Her So’ and ‘I Just Want to Have Something to Do’, which contains possibly the most perfect opening lines in anything*:

Hanging out on Second Avenue,

I just want to be with you,

I just want to have something to do.

But if you really want to know just why I love this band so much, go and listen to Blitzkrieg Bop. That’ll explain it better in 2 minutes than I could given a million years.