As opening lines/statements of intent go, “I’m a street walking cheetah with a heart full of napalm” should be up there with the greats. But that’s not what I’m here to talk about today.

As with many Doctor Who fans, I have issues with Steven Moffat’s stewardship of the show. Over reliance on continuity and season long arcs, a lack of female writers (I was ecstatic to see Rona Munro return) and a hope that someday I’ll visit the alternate universe where Matt Smith and not Peter Capaldi was the Doctor in Robot of Sherwood. Curiously, Clara isn’t one of them. Yes, Jenna Coleman was hard done by, probably stayed a season too long and the Impossible Girl plotline could have used another rewrite or two, but none of those is really her fault.  But the reaction that Clara inspires, well, I haven’t seen it since Adric, or possibly Donna. I admit, I was far from a Donna fan at first (Not being aware of Catherine Tate’s comedy), but that was till Turn Left. Now, I’m itching for the next series of Ten/Donna adventures from Big Finish,  the announcement of which caused what seemed like half my Twitter feed to stand up and shout “CRIIIIBBBBIIIINNNNSSSS!” 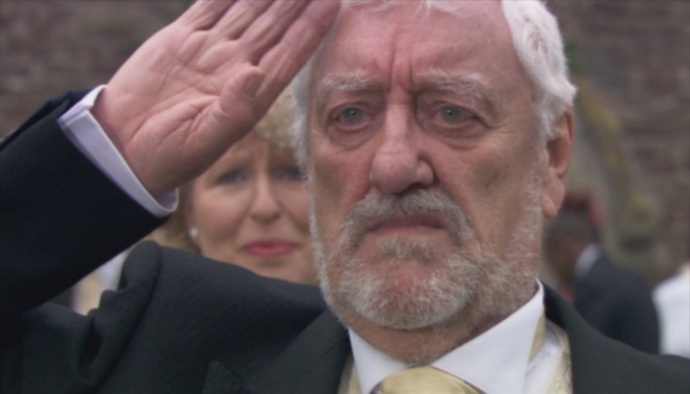 Best. Companion. Ever. (Who isn’t Ace or Sarah Jane)

It’s the level of fury that get’s me, nerd rage I’ve not seen since the Star Wars prequels. Yeah, I was young, dumb and angry, and said my fair share of stupid shit about them, but I’ve let it go. I’m not saying I’ve matured, but I’ve grown enough perspective (and grey hair) with age to remember that actual people who worked on those films, people who’s lives were made a living hell by something that should have been the happiest moment of their lives. I’ve tweeted a couple of times to Ahmed Best recently, saying if he’s ever in Sydney I’d love to buy him a drink by way of apologies. I can’t take back what I said about him in my younger days, but I can learn from it and not do it again. I’m not an apologist for the films as such, but I’ll sure as hell defend the people who worked on them.

Geting back to Who, I can’t fathom the idea that someone would stop watching the show, as some proclaimed, whether that be owing to a production team or a character they can’t stand. I loathe the character of Adric (The Wesley Crusher of Doctor Who), but I’m still going to watch his episodes, otherwise I’d miss out on Kinda (One of the most perfect and utterly brainmeltingly good bits of Who from any era and Earthshock (Spoilers…) People seem to expect the show to fit their whims, or to be always good, and people, that’s not what Who is about. A consistently good season? A season without at least one “Ohhh, that could have been a bit better?” THAT’S NOT MY SHOW. I need the rubbish to balance out the brilliance. I can’t quite explain it, but consistency isn’t one of the show’s strong points and that works for me.

You see, I love Doctor Who. (Shocked, gambling, winnings etc…)
I love it when it’s great.
I love it when it’s rubbish.
I frequently love it more when it’s rubbish – my adoration and uncritical love for The Horns of Nimon is well known. For those not acquainted with it, there’s some crap monsters, a minor character who splits his pants at his death, some of the most bored extras I’ve ever seen and the Doctor and the main villain are in a scenery chewing contest, while Romana plays it deadly straight. It should be unutterably awful, and yet I adore it with a joy that I’m sure has made my wife hope that someday I’ll talk about her like that*.

Getting back to the earlier point, I’m trying to praise Moffat, not to bury him. You see, despite all the bitching I may do, there’s some joyous moments during his tenure that make me punch the air and shout “That’s my show!” So, here’s a couple you may not have heard of, taken from Moffatt’s novelisation of The Day of the Doctor (Yes old time fans, Target novelisations are back!) Firstly, when all three Doctors are inside the Black Archive, and find copies of the Peter Cushing Dalek movies. There’s a lovely aside between Clara and Kate Stewart about how UNIT tried to suppress them, but they kept showing up on bank holidays, and that Cushing and the Doctor became great friends. Of course, they only found this out when Cushing started appearing in films made long after his death…

Secondly, is this extract, taken from when the Doctors are translating Gallifrey into the statis cube:
It took the better part of a day to translate the world of Gallifrey from one plane of reality to another, and the General was right. The planet screamed and burned and raged.

There was a town, on the southern shore of Lake Calasper, ripped apart by a giant earthquake. No one should have survived, but everywhere the people ran, they found a  blue police telephone box standing in front of them, opening it’s doors.
A tornado tore through a tiny village, till a ring of blue boxes spun round the storm in the opposite direction, shinking it into the ground.
As cities and towns and villages burned all around the planet, blue boxes came hurtling through the smoke, rescuing people from windows and rooftops.
A sky transporter, plunging towards the heart of the Capitol, was suddenly being piloted by a funny man with big ears and a black jacket. Everyone on board stared out of the windows, as he climbed along the wing, to rewire one of the engines.
A ship on the high seas, about to capsize, was suddenly captained by a strange little man in a frock coat and check trousers, who kept offering people gobstoppers and complaining about his aunt being giddy.
There was man with a ridiculous umbrella, who evacuated a school as a mountain crumbled towards it, and kept everyone laughing as they ran. A gentle cricketer took command of a hospital on fire, rescued the patients and completed an operation as the flames licked at the theatre door. A man with a cloud of white hair and swirling cape stood on a beach, and with a tiny silver rod, froze a whole tsunami as it thundered towards a town.  A laughing joker in a colourful coat led a party of miners out of the tunnels that had come crashing down around them. Four children, trapped on the side of a cliff face, knew beyond doubt that no one was coming to their rescue, till the end of an absurdly long scarf dangled down in front of them.

I was everywhere I was needed that day, across all my lives, and I believe I have never run so fast. If I sound proud, forgive me: it is the inverse of the shame I carried for so many years. That was the last day of the Time War, but it was no longer the worst day of my life. Instead, this was the day the people of Gallifrey rose up, and put 2.47 billion children safely to bed. This was the day I remembered who I was, and swore never to forget again.

This was the day of the Doctor.

Yeah, that could be said to be overly long and emotionally manipulative. And it’s working. Now,  you’ll excuse me, there’s some dust in my eyes. Yep, just some dust. And who the hell is chopping onions at this time of night? *ugly crying*

PS: I do have one last thing to say about Who at the moment: BINRO WAS RIGHT.
*She hasn’t watched it, but when her schedule frees up, in oh, 2028, I’ll sit down with her and some popcorn and pop it on. I may even live tweet the proceedings. 🙂