So, Zedtown on Saturday. It’s my 4th event and 2nd crewing. My legs still hurt, backs a bit wonky and it’s a cast iron reminder of how unfit I am. On the bright side, according to my phone’s fitness tracker, it was my most active day ever.

So, what went well? Pretty much everything that I saw. Players seemed to enjoy things, the story (What I saw of it) worked. Terrible accents and impromptu roleplaying. Seeing regular groups (Sydney Nerf Wars, the Russians and the Red Berets) matched by increasing numbers of newbies. The genius who decided to sort the cloakroom by ticket colour, which helped more than you can imagine. Searching for bags singing along to Metalachi’s Run to the Hills. The zombie horde counting down to when they respawn. Seeing large numbers of players flee like frightened children. Hell, a few got tagged in the initial zombie release at the start of the game, the poor suckers. The sheer enthusiam people have for this event, even from passersby who asked what was going on. The woman in a wedding gown, both pre and post zombiefication. (And there was an actual wedding on campus that day, along with a dance event, construction and a robotics festival) And that it’s only taken 4 events, but there’s finally a decent photo of me.Mind you, it’s the only one of me I’ve been able to find, but it’s a start.

That’s me on the left. 🙂 And yes, fantastic backdrop

There wasn’t much that didn’t work. True, there was computer troubles at sign in and we almost ran out of tape at the cloak room (Can someone please invent flavoured sticky tape? I’m sure I swallowed some of it when I was tearing it with my teeth). There were a few complaints that the event theme got released with less than two weeks to the event date, and while I can understand those, surely everyone can manage a half decent cowboy costume from what they have? Oh, and the intruders – fuck those guys. Short version: 4-5 people who live on campus decided to join in, wrapping green shirts around thier heads  and attacking players with pool noodles, then fleeing when confronted by game mods. Last I heard the event photographers were combing through their shots and if found would be sent to campus security. And I can’t not mention the guy with half a shopping cart full of booze wandering around – what the fuck? I know he wasn’t a player, but what the hell? 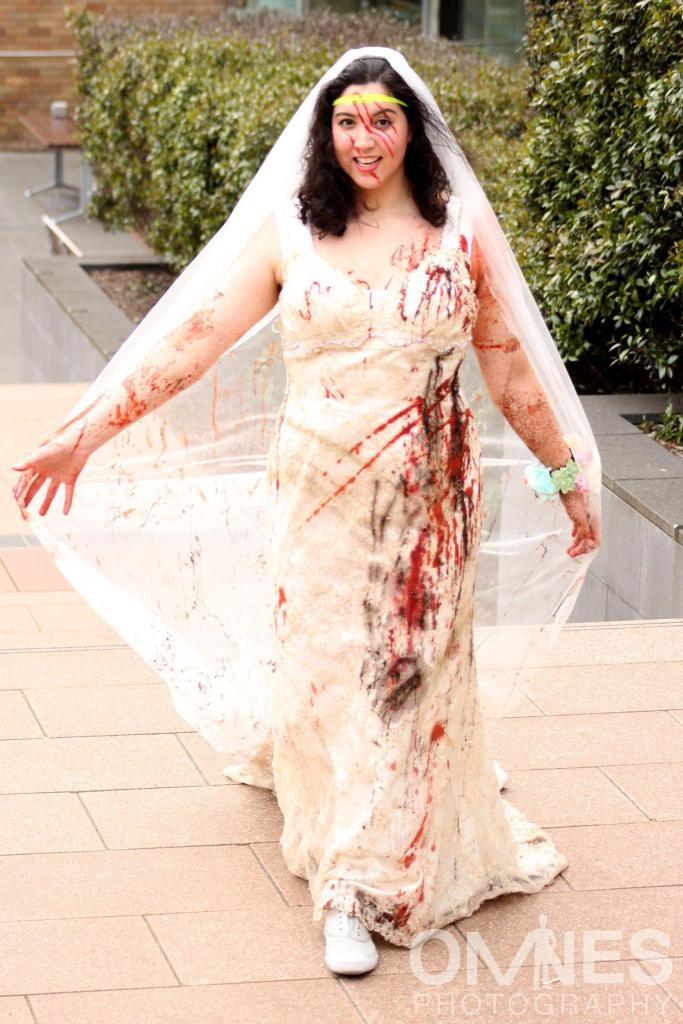 I’m not trying to be over harsh, or claim that anything, for me, overshadowed the event. Things will always go wrong, no matter how prepared you are. But those problems were taken care of in a speedy fashion and the game went on. It’s worth remembering that we’re all volunteers, that we’re doing this for fun. And yes, it’s a hell of a lot of fun, as well as a hell of a lot of work. I’m under no allusions to as my role, I’m a tiny cog in the machine compared to the amount of work others do. I spent a lot of my time manning the cloak desk. But I still enjoy the hell out of it and I’ll gladly be back to do it all again, aching body or not.

My main issue was that while crewing is great fun, I don’t get to play. Crew are a vital part of the experience, no event can run without them. Crewing is something everyone should take part at one point or another – some of the most fun I’ve had in LARP’s has been crewing. But I miss that white knuckle adrenaline of playing, of not knowing what the hell is going on or whether the next step you take will be your last. The camaraderie of fellow survivors, who are still keeping blasters trained on each other. Is that person an Original Zombie, or can they be trusted? Well, that and getting to act like you’re in a Schwarzenegger movie – I have trouble resisting the chance to indulge in over the top machismo, as anyone who’s played one of my con games can attest to.