No, I most certainly am not. I’ve been struggling over whether to contribute to the ‘It’s OK to talk’ movement, mostly out of a fear of seeming to jump on a bandwagon, or writing some horrifyingly self-indulgent twaddle. It’s a hell of a thing and I support it with no reservations whatsoever, but contributing myself? It’s one of the joys of having a shithouse sense of self worth that means I’ll write a bunch of stuff then delete it assuming it’s rubbish. Anyway, assuming I haven’t deleted this in a panic, here goes.

These days I prefer speaky Henry to shouty Henry, but the song still means a lot

A few months ago, I had a moment that could be described as a moment of clarity. It was a moment that made me realize with all certainty that I needed to talk to someone. I’d prefer to keep the moment itself private, but needless to say, telling my wife wasn’t easy. She didn’t exactly react well, but was pleased that I’d been able to tell her. It’s been rough. Since the end of a job and workplace I loved in 2013, I’ve been feeling increasingly out of place, as if I don’t know where I fit anymore. The two jobs I’ve managed to hold since then haven’t helped much either, though I did discover I’m not suited for phone based customer service. FUN FACT: If you want to learn to really, really hate humanity, answer phones for a living. Job seeking hasn’t helped either – I’ve been doing the same thing for that long I’ve no real idea of what else I can do. I know, logically, that I can apply what I’ve done to other stuff, but finding somewhere that’s willing to let me do that, that’s been an issue.

Moving on, I think a lot of it is to do with my sense of self-worth, or lack of it exactly. I can remember feeling that way, almost as far back as I can remember. I’ve not thought about suicide much since my teens, and how much of that was serious or teenage idiocy I don’t know. I do know I wouldn’t have gone through with it (Mostly out of being an abject coward and out of horror at what situation that would leave my family in.) but that doesn’t mean I didn’t spend more time than I should have pondering it, mostly in the ‘how many of you other fuckers can I take with me’ sense. I went to high school with more than a few people that I wouldn’t piss on if they were on fire. It took  a long time to find people that I felt comfortable with and to feel OK in a crowd. I still find myself needing alone time (Or as I call it, sitting in a cave) after a lot of interaction, and I’m fine with that. Better to have a coping mechanism than burn out.

Bloody brilliant. The first verse get’s me every time.

Anyhow, the lack of self-worth. It’s a constant struggle to feel as if I’m actually helping, to be useful, or even finding validation and worth out of what I do. It’s why having people sit down at one of my events and ask what it’s about, as they’d seen my name and signed up without reading the blurb such a terrifying prospect. It’s flattering don’t get me wrong, but it chills the blood. Something I’d done, hell, just my name has made people want to participate? It’s something that still confuses me, despite the fact that it shouldn’t. Or at least I think it shouldn’t. Somedays I’m not sure. Realizing the sense of achievement in that only works occasionally. Let me put it this way – my wife volunteers with a theatre group that helps refugee kids tell their stories. I write silly games. No matter how hard I try, I can’t balance those two up. I’ve tried, and there’s been moments that have come genuinely close, but I’m still not quite there. Incidentally, if you get the chance their shows are well worth seeing. You will laugh, you will cry, you will be furious at current government policy. But I digress…

A subtle critique of the current administration I thought…

It’s in the last few months that things seem to have changed, there’s been a burst of productivity, and ideas. I’m running 2 regular games, writing for cons, helping write or crew other events and have another couple of projects cooking away and I’ve been bloody loving it. Sure,  keeping bills paid would be more useful in the short term but I haven’t felt so many ideas flowing in a long time. I’ve got a pile of projects on the go, my wife has been incredibly supportive and there’s a bunch of people around me who care and want to play in my events. So, why am I still in the dumps?

If you don’t think Alone With You is one of the greatest pop songs written, then we may have to fight with knives.

If I had an answer to that, then I’d be screaming it from the rooftops. Yes, I’ve been talking to people of late about what’s been going on, and that’s helped a hell of a lot. I’m fairly certain I spent more time discussing my mental health than my future career prospects with the careers counseller I saw recently. It didn’t help my future career prospects as much as others, but it provided a wonderful shot of self esteem and drive, part of which I’m sure has helped inspire me. I think it’s a need to feel useful and as if I’m contributing, something that plauged me during my last bout of unemployment. So, actually forcing myself to write, or to get stuff done around the house, while not as seemingly useful as paying rent, means I’m still doing something that I can point to at the end of the day and say “I’ve done this.”

I’m currently stuck in a “Do I need to hang on this BS’ argument with myself, or to explain it using differet metaphors, I’m stuck somewhere between Star Trek V’s “I need my pain” or to quote Iggy Pop, “If I kick out my demons my angels might leave.” I’m the first person to agree that neither of those sources are valid psychological arguments, though I do feel that “What does God need with a starship?” is one of the great philosophical and theological questions of our time. I’m not sure how to explain the issue, or if I understand it myself, but a large part boiled down to this: do I dare give myself permission to be cheerful and what will happen if  do?  I’ve been used to being miserable for so long, that I’m not sure how to break out of that for more than a brief moment. Gods, I sound like I’m 14 and not 36.

Look, I’m not sure what else I can add. What I can say is this: talk to someone. Doesn’t matter who, but if you need to talk, then talk. It’ll help. Don’t be afraid. It ain’t easy, and it ain’t fun, but it’s worth doing. 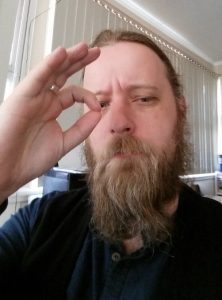